Hawaii’s favorite food—poke—has been around for centuries. One thing all poke has in common is cubed, raw fish. From there, the variations are endless. It’s a healthy staple, and poke bowls are now gaining popularity across the United States.

“It is a Hawaiian traditional dish, and nowadays can be done many ways and is more and more popular around the world,” says Kauai native Noelani Planas, executive chef at Ko’a Kea Hotel & Resort’s signature restaurant.

At Red Salt, Planas offers her own take on the dish. “It’s very time consuming and has lots of steps,” she says. “We use very thin slices of cucumber ribbons and perfect square shapes of fresh ahi tuna and ono fish. It’s served checkered board style with soy ginger sauce, wasabi tobiko, red tobiko and green onion.”

Want to sample other versions of poke while on the island? Planas recommends a trip to the local markets. “At the local markets they make about 10 different kinds, so you get a variety to try.”

To learn more about Red Salt or to make a reservation, click here. 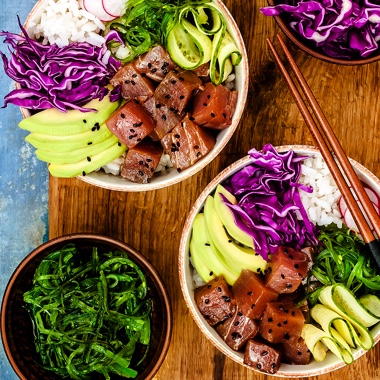